Carmen Lagala is a New York City based stand-up comedian who made her network television debut in 2018 on The Late Show with Stephen Colbert. Carmen was featured in the 2018 New York Comedy Festival for stand-up, sketch, a roast, and her own show “Puppets Present” which was a Time Out New York pick for “Best Shows to See”. She’s performed in several other festivals including Brooklyn Comedy Festival, Bridgetown, Rogue Island, and the Women in Comedy Festival. 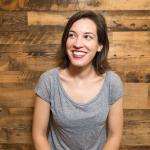