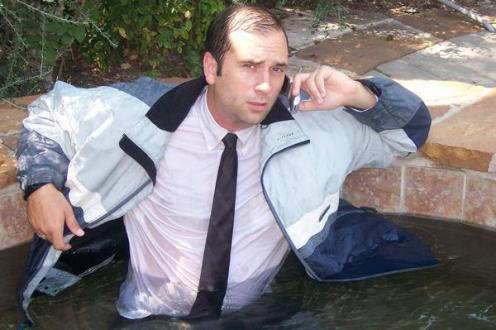 Tom McCaffrey was born and raised in Manhattan. When he was just 11 years old he was plucked from his elementary school by modern dance guru Jacques D'amboise, who was scouting for dance talent, and performed with 25 other kids on the 56th Annual Academy Awards alongside Irene Cara. When he was 14 he auditioned for Manhattan's prestigious LaGuardia Performing Arts High School and was accepted by the drama department. In 1999 he began his career in stand-up comedy in LA and in 2003 he was chosen from thousands of tape submissions to compete in Comedy Central's "Laugh Riots" national stand-up competition. He won the New York semifinals and placed 3rd Runner up in the finals. Later that same year he appeared on Comedy Central's "Premium Blend" and "Shorties Watching Shorties". In 2004 Comedy Central chose him as one of their "Fresh Faces of Comedy" which entailed him shooting three national commercial TV spots. In 2005 he was tapped by Comedy Central again to host their "Secret Stash Movie". He also performed on the "Invite Them Up CD/DVD compilation" produced by Comedy Central Records. He has appeared on the VH1 shows "All Access" and the upcoming "100 Greatest Hip Hop Songs". He just taped 8 episodes of the new show "The A-List" which airs Friday nights at 9:30 on Animal Planet. He has written for "The Onion News Network" and he writes a monthly humor column for the magazine "The Comedians", a publication that focuses on the NYC alternative comedy scene. Quite simply he is the most hilarious writer and stand-up comedian in the history of the universe.