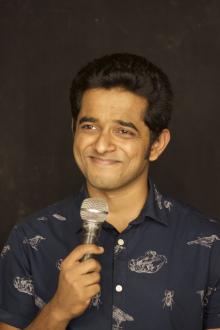 Naveen Richard is a stand up comedian, actor and writer from India known for his slice of life comedy which combines his iconic facial expressions and striking character work. His one hour stand up special "Don't Make That Face" was released on Amazon Prime Video in February 2017. He also wrote and acted in several episodes of Comedy Central India's Sketch Show "The Living Room" in 2015 and also the show "Challenge Accepted" shortly after. He also wrote and acted in the critically acclaimed Mockumentary "Better Life Foundation", which was nominated as one of the Top Five Web Series in the "Mumbai International Film Festival" this year.