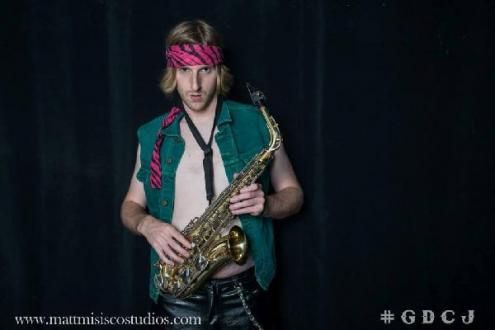 Jeremiah Watkins is one of those comedians that you can't forget. Born and raised in Kansas, he's literally been performing since the day he was born. (His mom brought him home from the hospital in a Santa Claus outfit) Throughout childhood, he acted, sang, and began honing impressions. In high school, Jeremiah was known for his comedic music videos, sketches, and broadcasting segments which he won multiple awards for at the state and national level. At 19, Jeremiah landed his first job in the industry as an on-air personality at a local Kansas City radio station. A  year later, he moved to LA to pursue his dream of becoming a cast member on Saturday Night Live. Since then, he has established himself as one of the most physical stand-up comedians in Los Angeles with his high energy and off-the-cuff style.   He performs regularly at The Comedy Store, The Improv, The Laugh Factory and more. His show Stand-Up On The Spot was named 1 of "5 Funniest Nights in America" by GQ, and he recently placed 2nd in the Big Sky Comedy Festival.  Watkins has also performed at Just For Laughs in Montreal, Comedy Central's New York Comedy Festival, South by Southwest, and Riot LA. You've seen him on Jimmy Kimmel Live, on VH1 with his comedic dance skills, and he can be seen starring in the the film i-Lived (available on HULU) and the upcoming film Betting On Baker in 2016. He has also trained at Second City and The Groundlings, and has performed improv all over Los Angeles. No matter what size the audience, Jeremiah Watkins guarantees a memorable show experience like you've never seen before.