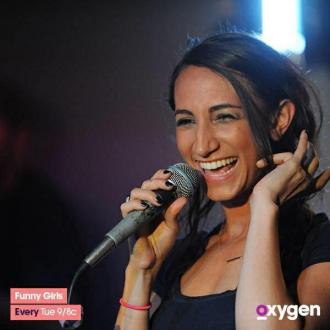 Ester Steinberg is hot off the Montreal Just For Laughs New Faces showcase. You can watch her every week on the hit reality series “Funny Girls” on Oxygen where she is mentored by Bill Burr and Margaret Cho.  She started doing stand-up on the high school lunch tables in Tampa then moved to New York and attended NYU’s theater program where she spent her nights performing in the New York comedy scene. Ester currently resides in Los Angeles where she performs regularly at the Comedy Store, Hollywood Improv, and Meltdown. She hosts her own monthly show at Canter’s Kibitz Room frequented by comedians such as Bill Burr, TJ Miller, Hannibal Buress, Jeff Ross, and Natasha Leggero. Ester has been featured in Time Out New York, Nylon, E!, Variety, Glamour, and Entertainment Weekly. She writes and stars in “Becoming LA,” a web series showcasing her talent for sketch and improv through an array of outlandish characters.Her festival credits include Montreal Just for Laughs, Bridgetown Comedy Festival, and Laughing Skull. Her style of comedy is smart and witty with immense energy, theatrical character act-outs and edgy one-liners.